A Comparison of Western World And African Essays and Fables; Brown, Black And White People Have Common Storytelling Skills

Stories seem to have a life of their own. But what is that which is life giving? Eight aspects bring stories to life in all essays and fables written or told in the West and in Africa and these are: Situation; story piece; truthfulness; necessity; kindness; meaningfulness;  memorableness;  and moral-boundedness.

By situation is meant the fact that a story is built around context, circumstance and plot.

By story piece is meant the fact that a narrative is the emotional experience that the writer or story teller builds and animates in form of action, sensation, information, progression and insight.

Truth(fulness) is the crystallization of the story and how the story portrays the characters.

By necessary is meant the fact that the story is entertaining, addresses an issues and satisfies a curiosity.

By kind(ness) is meant that it contributes something to humanity.

By meaningful(ness) is meant the fact that the story has substance.

By memorable(ness) is meant the fact that the story is relatable.

By moral-bounded(ness) is meant the fact that the story has lessons it passes on.

See if you can find one or eight of the aspects in the lines below:

“I am trying to make, before I get through, a picture of the whole world-or as much of it as I have seen. Boiling it down always, rather than spreading it out thin.”

What writing is and does
By Ernest Hemingway
to Mrs. Paul Pfeiffer, 1933 Selected Letters , p.397

“All good books are alike in that they are truer than if they had really happened and after you are finished reading one you will feel that all that happened to you and afterwards it all belongs to you; the good and the bad, the ecstasy, the remorse and sorrow, the people and the places and how the weather was.”

“In truly good writing no matter how many times you read it you do not know how it is done. That is because there is a mystery in all great writing and that mystery does not dis-sect out. It continues and it is always valid. Each time you re-read you see or learn something new.”

What to write about
By Ernest Hemingway
to Harvey Breit, 1952
Selected Letters, p.770

“The good parts of a book may be only something a writer is lucky enough to overhear or it may be the wreck of his whole damn life-and one is as good as the other.”

What to write about
By Ernest Hemingway
to Scott Fitzgerald, 1929
Selected Letters, p. 305

“Dostoevsky was made by being sent to Siberia. Writers are forged in injustice and a sword is forged.”

What to write about
By Ernest Hemingway
Green Hills of Africa, p.71

“…civil war is the best war for a writer, the most complete. Stendhal had seen a war and Napoleon taught him to write. He was teaching everybody then; but no one else learned.”

What to write about
By Ernest Hemingway
Green Hills of Africa, p.71

“Madame, all stories, if continued far enough, end in death and he is no true-story teller who would keep that from you.”

What to write about
By Ernest Hemingway
Death in the Afternoon, p.122

In “If” the situation is  Dr. Leander Jameson Starr’s activities in colonial Africa. The story pays tribute to his courage and dignity and critiques the cowardice of the colonialist authorities.

The situation and story
Rudyard Kipling’s
“If”
1910
A Poem

In the “Elephant’s Child,” the situation is the young African elephant and the story is about this elephant’s curiosity about other animals and things.

“ In the High and Far-Off Times the Elephant, O Best Beloved, had no trunk. He had only a blackish, bulgy nose, as big as a boot, that he could wriggle about from side to side; but he couldn’t pick up things with it. But there was one Elephant—a new Elephant—an Elephant’s Child—who was full of ‘satiable curiosity, and that means he asked ever so many questions. And he lived in Africa, and he filled all Africa with his ‘satiable curiosities…”

In the “The Elephant's Child (poem)” the poem captures three aspects and those are: meaningful, memorable and moral-bound.

“I Keep six honest serving-men:
(They taught me all I knew)
Their names are What and Where and When
And How and Why and Who……”

In Aeschylus’ "Agamemnon", one gets to know about the experiences around the return of King Agamemnon.

“So a man once raised a lion cub
in his own home. The beast
lacked milk but craved its mother’s teat.
In early life the cub was
gentle…….
Its fiery eyes fixed on the hands
that fed it, the creature fawned,
a slave to appetite.

In "English As She Is Taught", one gets to know about the experiences which are necessary for one to understand what they read as well as being able to read it back correctly.

“……He sprang to his feet as soon as he saw who it was. He confronted the head messenger, trembling with hate, unable to utter a word. The man was fearless and stood his ground, his four men lined up behind him…..”

In the “King’s Impossible Request”  a fable from Africa we meet Walukaga the iron-worker wisely indulging the King who had made an impossible request.

“I request you to make an animate being out of one of your metallic human statues,” demanded the King.
“Yes your majesty,” replied Walukaga.
“My King, I wish to make a request in return,” begged Walukaga, as the King was about to leave.
“What..”? Asked the King.
“In order for me to make a living metal statue, the oracles demand that the requester collects 100,000 gourds of tears, 100,000 bales of eye-lashes and 100,000 gourds of milk,” demanded Walukaga……

From the above, one finds that all the eight aspects feature in all essays and fables written or told in the West and in Africa.

In the excerpts one is captivated by all or one of the following:
Situation; story piece; truthfulness; necessity; kindness; meaningfulness;  memorableness;  and moral-boundedness. This is what makes a story have a life of its own! 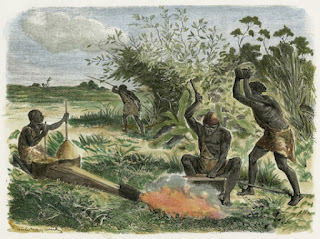 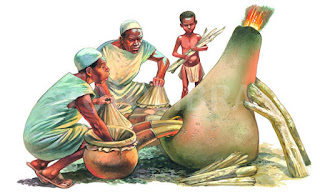 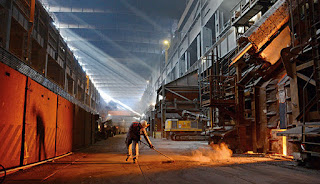 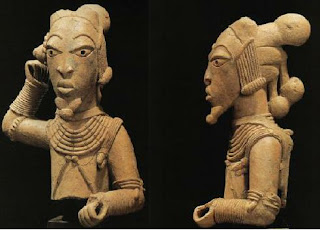 Posted by muyungamukasa at 19:25 No comments: