Occupations as I immerse into an American life.

There are certain activities in which I engaged for the past five, which define me now. I love America, I love my  anti HIV-AIDS work, I enjoy academic engagements, I love travel and I love giving back. The pictures here show my fav pastimes:

Posted by muyungamukasa at 19:03 No comments:

Most times the best route is not arrest, all the time the worst thing is shooting; Fix the Ghetto and the Police.

A community meeting event to "mix all shades of skin" as one of its goals as well as to demystify the idea of "not understanding a black person" turns out to be an eye opener for me too. I was the moderator and we explored what it meant to at least understand the people in our communities. We had to make two statements and describe what those statements meant to us through our eyes, ears, relations and reaching out.

1. "I have made an effort to talk to another person of a different skin shade than mine."

After the session where each of us were given 5 minutes to share, we had so many comments. But for me one stood out so well. We had a "white" young man comment that his parents had drummed it into him that he should avoid people of any other skin shade (especially..................yes, you guessed right).

For me it was the first time I improved my engagement with 2 persons from Myanmar and Bhutan. We have been in this group for a year and we had not really engaged like this. Honestly, I had placed them as "Filipino."  I am so happy I talked to them and they also got to know about my origins as a Ugandan-born American.

I remembered engaging in my first "popcorn and cookie" Friday in San Francisco City this year and everyone was excited about the day. Our own corner booth on Hyde st./Golden Gate Avenue (in the Tenderloin, for those familiar with SF) received over 1,000 people, between 10:00am to 12:00 noon, who passed by and we got to talk as well as pass out cookies and popcorn. So many other volunteers were stationed at different corners all over SF.

In 2014, I went to Oakland Zoo, to engage in an anti-HIV community event. Oakland Zoo, is located in southeastern Oakland. It contains modern exhibits. Most of its animals are kept in relatively "natural" habitats. The zoo is nationally known for its excellent elephant exhibit and has been praised for allowing their elephants to roam freely. It is here we that we spent that particular day dancing, talking, moving about and generally talking about the need to engage in loving and not stigma or discrimination.

I remembered the 2016 "Black Month and Martin Luther Day" in San Francisco. I made effort to find planned events that particularly caused engagement with people of other shades of skin. I wondered if this could be an opportunity to add more events during that month that are about eyeball to eyeball, handshaking, talking and when the evening passes we shall have called it a day. I plan to reach out to the organisers so that next year I try out the "White hug a black (WHAB)" and "White Police Officer Hug a Black (WOHAB)" booth on one of the corners in San Francisco. May be I should make this an ongoing project. The Black month is an opportunity I shall utilise.

A friend who is also interested in what works sent me a link out of which this material has been kindly borrowed:

Wichita Police and Black Lives Matter have come with a relations building initiative. Members of the Wichita, Kan., police department spent Sunday afternoon eating and talking with people from the community, at a cookout that was planned with the local Black Lives Matter group. The event was called the First Steps Community Cookout — a reference to its goal of bridging the gap between police and the community they serve. Taking place instead of a protest that had been planned for Sunday, the cookout came about after Wichita Police Chief Gordon Ramsay had a lengthy meeting with activist A.J. Bohannon and other members of the local Black Lives Matter movement. For more read: Police And Black Lives Matter Hold A Cookout, And Praise Rolls In. Retrieved from: http://www.npr.org/sections/thetwo-way/2016/07/19/486581466/police-and-black-lives-matter-hold-a-cookout-and-praise-rolls-in?utm_source=facebook.com&utm_medium=social&utm_campaign=npr&utm_term=nprnews&utm_content=20160719.

All pictures: Courtesy of Wichita Police. 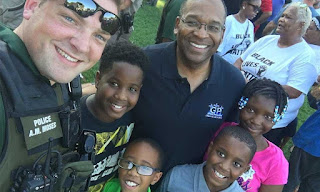 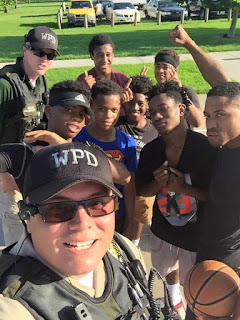 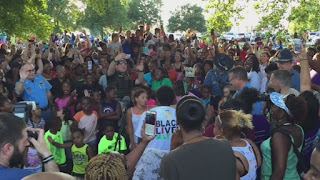 Posted by muyungamukasa at 21:20 No comments: